Over the years, for most extremely successful companies, it is common that the product and company name often merge into one. A prevalent example here is Mobil oil (a brand of engine oil) but most mechanics call it Mobil oil no matter the brand of engine oil they are using due to its popularity.

Same is the case with MMA and UFC, a lot of people have it mixed up and it often causes major misconceptions. If MMA is to become a mainstream sport in Pakistan just like it is starting to abroad, it is vital to understand the difference between UFC and MMA as this seems to be a major issue in Pakistan, especially with those martial artists who do not follow the sport too closely.

MMA is just the sport of mixed martial arts, it’s not some kind of organization, just like cricket is only a sport. UFC is an organization that has MMA fights. There are various MMA promotions besides the UFC all over the world(look up ONE FC, Bellator, Strikeforce, DREAM FC etc) who have MMA fights and NONE of them are any kind of government sports “body” that arranges fight officials(the referees, judges etc) or sanctions the SPORT. Think about it logically for a bit, would that even be fair if companies had employed the judges or referees? 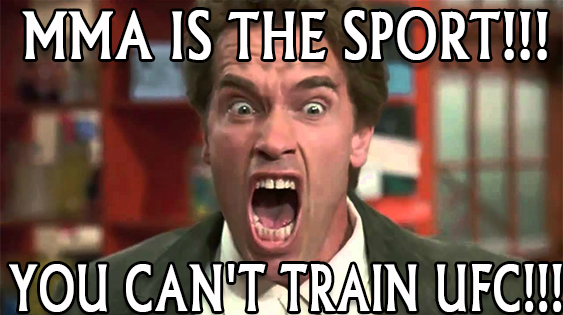 UFC(or any other MMA promotion) is not some regulating, government sanctioned “body” but a private “business” entity. Yes, the UFC is just a business entity that “sells” MMA fights to an audience. It does not arrange for the referees, judges, drug testing or fighter training. It just organizes the events and makes exciting match ups. The referees and judges (along with fighter testing) are arranged by an Athletic Commission (for the UFC and most other MMA promotions) which is not just responsible for MMA but also other sports such as boxing and baseball.

It is kind of frustrating when people in Pakistan talk about making a “body” for MMA to “train” fighters and what not. The training is the fighters own responsibility and there are gyms/academies (again, run by INDIVIDUALS and not the government) all over the country to help them with that. We have to realize MMA is a very different sport from cricket or even karate as they all have some kind of government “body” to organize everything and we’ve all seen how good a job they do at it. To be concise, MMA fights are the responsibility of the MMA promotions (such as the UFC) and MMA training is the responsibility of MMA gyms/academies and no…..you DONT need to register yourself/your gym with the UFC in order to become a fighter.