The initial reaction of any one hearing that an individual does martial arts is, “Oh, Judo Karate?” as if that is the only martial art that existed ever. This little phrase has 2 main issues:

The other phrase we hear is: “Oh like Bruce Lee and Kung Fu?” This again has the same 2 issues and connotations as ‘Judo Karate’ in Pakistan, but this time includes flying around the world by leaping 10 metres in to the air using one’s breath.

Understandably what we do may seem magic to someone unfamiliar, but it still does not give us the ability to disappear at will, fly, telekinesis, telepathy or any other myriad supernatural things.

Coming back to the point, the popularity of MMA as used in UFC events is causing a frantic search for Jiu-Jitsu in Pakistan. The demand for the art has always been there but only now is it coming to the force. The supply sadly is not as much. The UFC events are shown on Geo Super over the weekends and amongst the cage fighting community are the main source of instruction and inspiration. This undermines the teachings of a regular martial arts school at least half of the time but that is an issue for another time.

Regardless of this eventual rise in interest, the spread of awareness is still very slow. At the moment everyone interested wants to get in the cage and knock someone out or make them submit by ground & pound. There is very little interest in learning the intricacies of art or technique. This is because the Subcontinent has always been fascinated with hard or visual styles of martial arts: breaking bricks, KO(s). All thanks to the hyperbolic misrepresentations from Hollywood in the form of movies.

The interest is just that: interest. It does not translate to commitment in 90% of the cases. In the first couple of months or so the student inevitably leaves citing any reason that pops in to their head. Also parents start fearing that the child will turn in to some violence loving brick breaking machine in capable of discipline, particularly amongst families from the more well-to-do areas. It should be noted that those learning martial arts are more often than not more disciplined than those not learning martial arts. Martial arts help improve performance, increase focus and provide structure and discipline. But martial arts are seen with worse prejudice than liberal arts once were.

This means that the real determination and commitment comes from the not-so-well-off areas. Sadly that is also where the talent is being encouraged only. Practitioners and teachers from well-off families are few and far between (if any at all). They either stop altogether or move out of the country, in either case they get a ‘day-job’ and that puts an end to everything else because day-job means 24/7 slavery as at least Pakistan does not enforce working hours in any field. Few countries do, but still 24/7 is not the kind of job any sane health conscious person should/would go for despite the competition. After all presence of health is key to earning (read 24/7 = bad health = low performance = stuck on low pay and generally grumpy).

So talent is being treasured in the no-so-well-to-do areas (which are at the other end of the city from the author) and the focus so far has been on the hard styles. Cricket still overwhelms this nation’s every living breath despite it not being the national sport (national sport is field hockey). 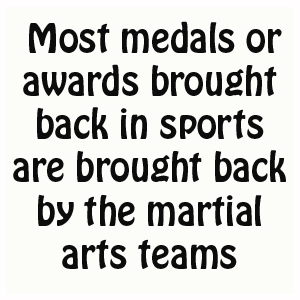 Martial arts in general are on the rise and Jiu-Jitsu is definitely amongst those (finally!!!). However as mentioned above cricket seems to be all end all for the country and thus very little support (even non-financial) is given to everything else, least to martial arts. Only recently someone pointed out in a letter to the editor in DAWN that most medals or awards brought back in sports are brought back by the martial arts teams. This lack of support from the authorities does not means clubs don’t operate. They do, but they require commitment from the students and teachers rather than passing interest (which is why a teacher often singles out a handful of students who show promise and only a couple from that handful stick it out through thick and thin to become recognised beyond their school/association/style).

All in all there is talent available in the well-off areas but the laziness, lack of commitment, and passing phases means that it is very difficult for a club/school in these areas such as ours. Still we try in the hopes that awareness will spread and students will come if for nothing else, then at least to learn some self-defence or fitness.

Authorities need to do more in this sector of sports. More clubs need to be set up in those areas where there are few and far between because talent is everywhere and we as a nation should hunt for it amongst ourselves like China does for Olympians!

Self-defence is important and new clubs would mean easier and better access to such skills for everyone, particularly women. Fitness is inbuilt but junk-food and perpetual snacking would render even regular gym pointless.

This blog has been taken from Shuraryujiujitsu.blogspot.com written by Syed Momin Zaidi