Recently PAK MMA got both national and international media coverage including The Express Tribune, Dawn, Newsweek Pakistan, The Hindu, Gulf News, The Rakyat Post, French Lobs and USA Today after an occurrence of fighting event Coretex in Lahore. PAK MMA took an interview from Zubair “Big Z Bear” Asghar – the man behind Coretex. 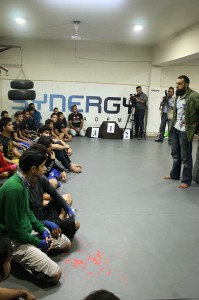 Can you give personal background of yourself (where are you from, etc)?

I was born and bred in the UK, moved to Pakistan in 2001. Finished my O-levels and A-levels in Pakistan, and then went to graduate from the University of Manchester. I now work with my parents in the family business – Shehan Shah Restaurant

When you started doing MMA?

I started about 2011 but due to various circumstances my training has been only intermittent unfortunately.

Why you choose MMA? What attracted you?

I’ve always loved martial arts since I was young. Initially because it was cool to be able to do fancy punches and kicks! But then I learned that martial arts is more than just that. I always say that a good teacher doesn’t just teach you how to punch but also WHEN to punch. I feel martial arts in general teaches us to bring out the best in ourselves – to control our anger and desires and focus on attaining a seemingly impossible yet achievable goal.

Nowadays there are usually many restrictions in single style martial arts competitions. With MMA, the restrictions are taken down and the fighter is able to do a lot more, but then is also required to endure a lot more to, testing not only his physical but also his cognitive capacity. There’s a reason for the word ‘art’ in ‘martial arts’ – because it is exactly that, an ART! Art doesn’t have restrictions or borders around what you are to do. Yes MMA has the rules for the safety of the fighters, of course. However I feel that if you wish to practice martial arts you are supposed to use your creativity and understanding of fighting to be able to do as you feel suits you best, rather than being single-track minded.

In which style you first started training?

I started my training in Bando Karate from the age of 14. I became a black belt when I was 17, Alhamdulillah!

Who is your biggest inspiration in the field of MMA?

My inspiration is the sport itself, no individual. The sport I feel can bring out the best in all of us, tame the beast inside and learning to control it. However, if I would have to pick an inspiration, it would be the fighters who are of a poorer background – boys who work 10-12 hours a day and still come to train for their love of the sport. They don’t make excuses; they just get on with it.

When and how you got involved in PAK MMA?

I can’t remember exactly! Sometime after my partaking in PFC 3 I exchanged words with members of the PAK MMA board. They felt that I could be an asset to the organisation, and I felt I could offer services to assist in enhancing it.

What challenges have you faced while being a part of PAK MMA?

The unfortunate usual challenges one faces when dealing with our Pakistani brethren – laziness, unfulfilled promises, false support etc. But as with anything else one must soldier on in the face of it all. Nothing worth doing is easy.

What do you expect that the future holds for PAK MMA?

If all goes to plan, PAK MMA will be the reason behind MMA being recognized as a national sport, InshaaAllah. 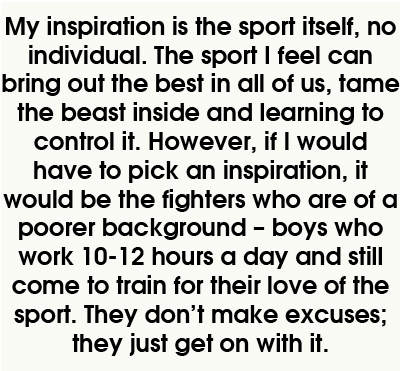 Why you thought about starting Cortex? How you started it?

I felt there were not enough events and competitions for our boys to participate in. Through competition we grow and become better, and there needs to be more growing to get our fighters to realize their full potential.

Which fighting rules are followed in Coretex?

Standard rules as laid out by the PAK MMA federation.

Can you tell us about the Coretex events you have held?

There have only been 2! First was a great success, unfortunately the second was not as good as the first. However through mistakes and misgivings one learns how to conduct future events. As they say, Mar Khaega Tho Seekhega!

Who are the champions of Coretex?

As there have only been 2 events, there are no individuals that can be named. However the boys who won their medals in our first event put on a great show.

What future Coretex events are you planning to hold?

The plan is to hold events every month at various gyms throughout the city, and then the country Inshaa-Allah.

What do you see Coretex doing from 5-7 years from now?

Coretex will be the reason for taking the most fighters abroad to represent Pakistan and perhaps even bring in fighters from abroad to fight on our soil, raising our country’s prestige and putting us on the MMA map, INSHAA-ALLAH!

What message do you want to give to PAK MMA Lovers?

Are you a fighter? Train till your body screams to stop. Then train some more. Are you a fan? Tell the whole country about the beauty of the sport. Scream until your voice breaks. Then write it down and show everyone. The word will only get out if you spread it!

Do you really love MMA? Why? Find an answer for that question. Then use that reason to help push the sport to levels that everybody else says is impossible. It is going to be a long, hard road to success. But guess what, it’s not supposed to be easy. Nothing worth doing is easy. So go make some noise for CORETEX, make some noise for MMA!