I arrived on December 2nd to Pakistan. Coincidentally, that same day a Pakistan Television press conference about a company called “Fite Selektor” was released on Youtube, stating that MMA was coming to Pakistan and this Dubai based Dutch company was going to hold an event to kick it off. “Fite Selektor” is another story in and of itself, but it really made me believe that I was doing the right thing at the perfect time. I mean, who wouldn’t?! This video was released the day I arrived. I had no idea about it. What kind of timing is that? Without delving too much into the matter this was an example Jungian Synchronicity of the highest order. This was an arrow of fate painted on the wall for me, pointing me in the right path.

So, soon after arriving I got an apartment above a real estate office. I put up a heavy bag and laid down “mats,” which were actually sheets of foam that were used to make sneakers. The first official “PAKMMA Training Center” was open! 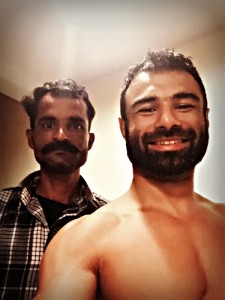 With me was a 17-year-old kid from Karachi, Ali Naseer who followed us on facebook and wanted to be a part of this MMA thing I was doing. So he came to Lahore for the winter to help set up the gym and the foundation for PAKMMA. Along with him was my grandmother’s former driver, (she fired him for no real reason, she just likes firing her servants after a certain amount of time), a constantly stoned on hash, been-there-done-that guy named Afzal, (affectionately known as “the fizzle”), whom I hired as my right hand man. He cleaned the place, cooked, guided me through Pakistani cultural norms, made sure people didn’t rip me off and that I didn’t end up somehow getting killed in a bizarre accident as can only happen in Pakistan. All three of us lived in this “gym.” Ali went back after his winter vacation but visits every chance he gets, and Afzal has been here ever since.

So the gym is set up, and I go out meeting every martial artist I can find hoping to recruit them to my cause. I found no one whom I trusted. They were all living in the 80’s. Death touches, ninja invisibility and “my style is the best” was the norm. They were only interested in me because they didn’t seem to understand why an educated American would decide to live like this. They entertained my visits and came to visit me quite regularly in the beginning, interested in seeing what I was up to. After a while they stopped visiting and I realized that I was going to have to do this alone; I would have to build everything from scratch. It became apparent that my two-month plan was not going to happen and it was going to be a long hard drudge through the mud. I still did not have a concrete plan at this point nor did I have any idea how long I was going to be in Pakistan or what was to come. I was living day by day. But at no point did I feel that I was on the wrong path. I did have my doubts as to whether this was all a smart idea and one that would give me a comfortable life, but I never doubted my success. It was empowering. Great things were to come.

If you are interested to write for Pak MMA blog, please send your article to info@pak-mma.com