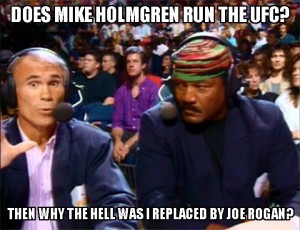 “Use the techniques!” I would often say that as a joke when I first started BJJ. I was watching one of the earlier UFC’s with Jim Brown, and the way he would refer to the Gracie’s use of jiu jitsu, I thought was hilarious – “Use the techniques…” He would say it in a way that made you think that a) only ground fighting used “techniques” and b) that the use of “techniques” was being demonstrated for the first time in human history by Royce Gracie. It also sounded really awesome. Please take some time and appreciate his commentary.

I’ll admit though, at the same time, the things that Royce was doing were so novel, and compared to the terrible striking of the other fighters, it was fair to say he was arguably one of the very few using technique. This use of “the techniques” (and there are a great many of them) in jiu jitsu is a crucial part of the BJJ game and for many, this vastness of technique is why they get started in the game, leave the game, master the game, cannot come to grips with it, and like many reading this, all of the above. And yet they keep coming back again and again for another attempt at cracking the code.

As someone who has fought and trained for MMA, I will be the first to say that striking is not void of technique, it does in fact involve a lot of it. But the difference between BJJ and striking is that while striking, your options are all essentially from the same position- the standing position. In BJJ you have the standing position, one person standing/one on the ground, the back, the guard, top, bottom etc. This creates for a large variety of techniques and possibilities and this is where the links between chess and BJJ begin. This highly technical aspect has also made the sport very nerd friendly (that includes me). While striking arts seem like something only a tough guy can do, BJJ – especially after seeing a skinny Royce Gracie use it against people much bigger than him- appeals to the idea that you can win a fight through smarts alone.

Now those of us who compete know that in order to be the best, you must also be tough and athletic if you want to excel in the sport, but the cerebral aspect is something that is much more highlighted in BJJ as compared to other combat sports. This is why the multitude of techniques that encompass BJJ, the number of variations in which they are presented and the application of these techniques to form one’s own “game” is a central part of what we can define as being “BJJ Culture”.

This plethora of techniques has done a good job of convincing many that BJJ can be mastered through your mind alone, much like the game of chess. Chess, in fact, seems to be the game that most often is associated with BJJ. Do a google search on BJJ + Chess and you will see the plethora of links between the two sports. Joshua Waitzkin, the child chess prodigy is now also a BJJ practitioner and there is also a BJJ team named, Checkmat! The links are extensive.

Just as chess has a large number of names for its moves and strategies, such as the “pin,” the “skewer,” (when a piece cannot move because it would put the king or another important piece in danger, or when because a piece MUST move, the piece behind will be attacked), jiu jitsu also has many, possibly even more technique names relevant to todays parlance. “Rubber guard,” “stoner control,” “the douche bag,” these are all names from Eddie Bravo’s tenth planet system and in my opinion, are the most out there in terms of jiu jitsu position and movement names (some would also say they are a few of the most ridiculous of names and I would not argue with that!). Just as there are many moves, there are many names for them and that is one of the reasons people are loving the sport so much, and why it can be considered to be a more technical sport than others.

The complicated nature of BJJ comes at a cost; for some, myself included, it often means an over analyzation of the game to the point where it becomes crippling. There is just so much to learn and so many things to ponder and fascinate oneself over that it is easy to forget that in order to become a good BJJ practitioner, you must master one thing at a time.  Just the other day while training in open mat, I met a very nice guy who was also injured like myself. Since we couldn’t roll, we were the perfect training partners for each other that day. We went from one position to the other, showing each other what we had learnt recently. At that point, I realized that often times the sheer number of techniques can prove to be an obstacle to the very people you would assume it would benefit. We dwell on the complexity of the sport and forget that sometimes in order to progress we must spend countless hours drilling the same thing over and over again. Our minds may comprehend it, but our bodies may not learn at the same pace. This is something that I have begun acting upon in my training only recently.

What I hope you, the reader, sees is that the technical nature of the game and sheer science of it, is what draws people to BJJ and very often keeps them there. It’s technical and it’s fair to say that it’s a part of BJJ culture. In fact, I would venture to say that one of the biggest compliments, if not THE biggest compliment that one can give to another in the BJJ community is “he’s very technical.” It kind of means that that person “gets it.” He understands the secret to good BJJ.  It’s the foundation upon which the sport is based and arguably any and all combat sport is built upon, but as I said many times already, BJJ seems to place more emphasis on this technical aspect than most.