With the constantly growing MMA scene in Pakistan and with all major cities producing fighters that are making a name for themselves, Karachi being the biggest city in the country had quite ironically been the furthest in MMA, it would be interesting to note that the very first BJJ seminar in Pakistan took place in Karachi, 2009 at Guru Gohar Gul’s (The S3) gym in Gulshan-e-Iqbal, but with the worsening conditions of the city over the years the growth of MMA in Karachi reached a stalemate. That was until dedicated fighters and coaches like Gohar Gul, Ovais Shah and Jamil Chandio opened up their gyms, training up and coming fighters, with teams like “The S3” , “Third Generation MMA” and the newest “K7 Kixkboxing and Boxing” and the smoker events organized by The S3 and Third Generation MMA, Karachi is slowly but surely making its way back to the MMA scene in Pakistan. 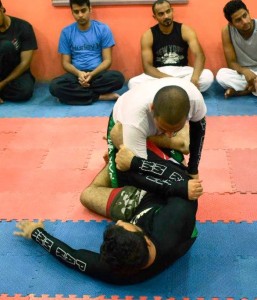 The seminar started off with Bashir Ahmad explaining and demonstrating the positional hierarchy of BJJ along with a few sweeps and transition from the major positions to give an idea of what to look for and what to avoid in terms of getting positions. The purpose of the seminar was to go over and demonstrate the basics of Brazilian Jiujitsu which has been the Achilles’ heel of most gyms and fighters in Pakistan.

Next was what is considered to be the key position in BJJ, the guard. About half of the seminar was  dedicated just to  understand the guard and on what to do and what not to do whether one was in or had someone in their guard. Bashir’s emphasis was on the fact that in order to be good at BJJ its not as much the technique as

it is the movements and certain positions that are involved. These included simple things like how to maintain (from the top) and break (from the bottom) the posture, basic wrist control and getting the arm across, getting foot on the hips and shrimping. 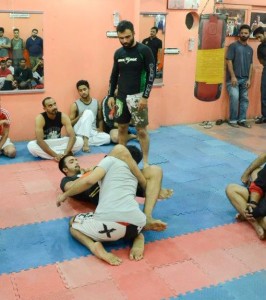 From that came some sweeps and submissions from the guard, namely the scissor sweep, hip bump sweep and the ar m drag, followed by some set ups and variations of the triangle choke, guillotine and armbar. The seminar ended up with a Q/A session followed by 1 minute friendly grappling matches between students to test out their newly learnt skills. Jamil Chandio presented Bashir Ahmad with a plaque commending his dedication and endless efforts in promoting  the sport of MMA.