Mixed Martial Arts Pakistan is very pleased to add Zain Asif to it’s team of writers, who will be posting articles on a weekly basis. Zain is a die hard fan of not just MMA but MMA in Pakistan and has been an avid follower of the organization since the start.

“A man’s inner self is revealed from his speech”. This was the opening statement of a sermon delivered by my Sheikh Dr Shahid Awais DB. This blog is to ask my readers to have an open mind and look at what is going on around us. Open up your eyes and hearts to the truth, accept that we as a nation lack a lot in areas like unity, trust, respect, tolerance, etc and try to build on these areas.

In Feb’ 2013 when I found out Bashir Ahmad ( Bashir Bhai) was given the fight card to fight in ONE FC I was really excited. Started following his posts on his page on Facebook. What increased my respect for Bashir Bhai more was his status on March 10th, 2013 where he said that everyone kept saying this fight was yours, but he replied that this fight is not just mine but this fight is for Pakistan. 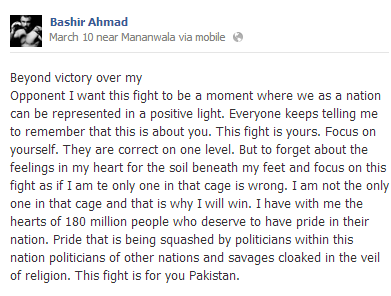 Bashir Bhai’s words spoke to me. I would question myself if this man can do something for Pakistan, why am I not doing anything about it. These words revealed what he truly felt. Now I wonder why he was given the title of “Somchai” the real man. His words had been etched into my heart. “This fight is for you Pakistan”.

Pakistan has had legends in the past as well and nearly all of them have a similar story. Pakistan Cricket team won the cricket world cup in 1992 under the captaincy of Imran Khan. Now look at what happened to it. Pakistani cricket team has become famous for charges of corruption, booking matches/match fixing, using drugs, we even had our players sent to jail. Let’s look back a few more years where Pakistani Squash legends like Jahangir Khan and Jansher Khan who were world No. 1 professional Squash players from Pakistan. What happened after these 2 legends, did Pakistan stop producing quality players. Boxers like Imtiaz Masood who won Gold Medal in Asian Games 1978 are not even heard of by the public. Great football/soccer legends of the 1960’s Murad Bakhsh, Turab Ali and Yousuf Jr. were never brought out to the public.

Murad Bakhsh was living in destitute conditions in Karachi’s Lyari area. Hunger and poverty had forced to sell his own medals, he had won, just to survive. Mehrullah Lassi and Faisal Karim are banned for life, both are Boxers. Mehrullah Lassi was an amateur boxer best known to win a gold medal at the 2002 Asian Games. Pakistan has had a lot of talented people wasted, dejected, forgotten. The list goes on.

My own opinion as to why I see these talents wasted is that we as a nation know nothing about these heroes. Pakistan has a very tarnished image in the international community and we are to blame ourselves for it. Another reason is that other Nations do not wish to see Pakistan rise in any domain. They will crush us from within and make sure we are humiliated to the extent that we can never show our faces in public again. We need to get over our differences and need to think of ourselves as a Nation. Positive competition is healthy and necessary for growth and negativity will only destroy us.

My request to the audience is to respect our elders, be it family or the elders of the domain they are in. Pay them the proper respect, learn from their experiences. They spent their lives learning the domain. There is no alternative to experience, no matter how brilliant you are, no matter how fast you can learn things. We need to think big, and keep everyone with us on the same track and pace. Pakistan is our home, it is our identity. Pakistan is what we are and who we are. We should think for what is best for our country as well as what is best for us. A road has been made in Pakistan for Mixed Martial Arts. Please do not let this sport have the same end as the other sports. Value the deserving players, let them come through a proper channel and merit.