Guess what, peeps? I went to the premiere of SHAH! I bet some of you are jealous, eh?

The thing is, I hate Pakistani media. I hate our TV, and our movies, with a passion. They are over-acted, the scripts so boringly simple and always seem to be about the same things: love or marriage conflicts. To spice things up a bit they’ll throw a little family turmoil in as well. So uncreative, so dull!

That is of course, until recently. I saw a trailer on Facebook for an upcoming Pakistani movie, about a boxer. This was to be the story of how he became a hero, and then how he was forgotten. No musical numbers, no childish love stories, no seemingly compulsory female protagonist who always drives the male hero crazy. Just a boxer, his sport, and his life.

A very simple movie but to the point, it serves the purpose it was intended for – to tell the story of the great boxer Syed Hussain Shah. A homeless child of Liyari, forced to work as a labourer from his childhood, he gets his chance to be a boxer. However life gives him a beating before he gets a chance to shine.

I always think that such movies have to at least touch our hearts. Well, this one gripped mine. Aspiring fighters should receive at least a semblance of motivation, and even fans of fighting will be more than impressed with what they witness.

News of the production of this movie is that it was seemingly was produced by 5 guys and a laptop. It had a meager budget; just shy of 1.3 crore Rupees. Which in movie terms is just peanuts – the rather ridiculous (and to me, offensive) ‘Dhek Magar Pyar Se’ manage to heave up 6 crores. Honestly, why they’d need so much on a ridiculous love story is beyond me. And I’d rather not find out, either. Biased? You’re damn right I am, and rightly so. Of course that’s just my opinion, but I know I’m right.

Obviously with such a budget there are things that would be a little off caliber. The story starts with a reporter in modern days who we see twice again in the whole movie, but has no input to the story whatsoever. It’s obvious she’s put there for a chance to show the major sponsors, Pepsi and Bank Alfalah.  There are long pauses that are most certainly unnecessary, the acting was a tad mediocre (adding sound effects for crying?), the sound wasn’t the best when it came to the punches and they’ve even ripped off the final fight from the British movie SNATCH (that’s right, we caught you). But you can easily dismiss all of this, simply because it is the first movie of its kind in Pakistan. First steps can never be perfect; you have to make a few mistakes in order to learn where to improve.

However, in hindsight, one thing nags me about it. Something is missing, something so important in a movie about a fighter that it’s tantamount to a storytelling crime to leave out. Heck, in my opinion it’s probably the most important thing especially if you want to attract a nation to a sport that’s relatively unfamiliar to them: the movie showed no training whatsoever.

OK sure, we see a young Shah doing a bit of skipping, shadowboxing. Then an older Shah does a bit of barefoot jogging on a street. After that for reasons that bewilder me, Shah stands on a rock next to the shore in the water and does some extremely light shadowing again. But that’s it. And that is just poor.

No sweating at the gym, no lifting heavy weights, no speedballs, no calisthenics, nothing. Not even a few pushups or pull ups. One could argue this movie was more about Shah’s struggle in life, rather than just his fights. But that’s just it, for a sportsman training IS the struggle of life. That’s hours of their days gone, upto thrice a day breaking sweat, training till the body hurts and not even letting injuries stop the, as they train around them. 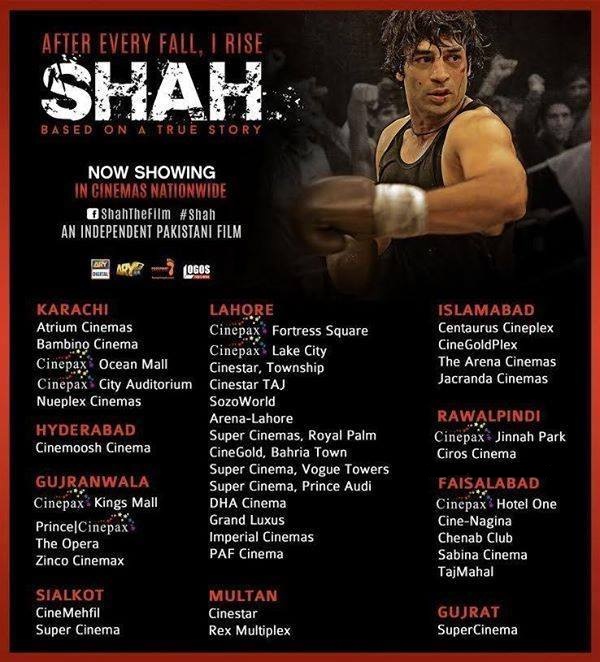 One other reason it is very important, is so that aspiring fighters can see what is required of them to BECOME a fighter. You don’t suddenly one day put on some gloves, shadowbox and skip a little et voila; you’re a competitor. Oh, some of you have no idea. Just think, some of the best fighters probably don’t even step into the ring for practice sparring until a few weeks of perfecting technique.

It takes months, if not years, to get ready for even a simple competition. It takes sacrifices of time and even food. You have to train until your body aches; you have to train until your muscles burn and sometimes even until you cry because it hurts so much. You cry not because you’re weak or soft-hearted, but because you want this so much that you don’t want something as meager as pain to stop you from moving forward.

You aspiring fighters ask yourselves, and answer honestly; does this seem like even part of what you go through? Or do you just come to the gym 3-4 times a week if possible hit a bag a few times and feel good about yourselves? It’s very easy to say ‘Yes!’ to me but if you aren’t looking in the mirror and hating what you are now – simply because you know that there is a formidable force trapped inside of you that you’ve not tapped into yet – then maybe you’ve got more than just PHYSICAL training to do.

That being said, I loved SHAH. I’m not at all ashamed to say I had a few tears to shed. I had the honour of actually meeting Syed Hussain Shah, and I couldn’t resist kissing his hand much to his discomfort, a proof of his humility. I asked him to pray for future fighters that they won’t have to go through the difficulties he had to. And that is what we will all fight for InshaaAllah.

Well done to producer, director, screenplay writer and lead actor Adnan Sarwar for making a mark in Pakistani cinematic history. We look forward to more work like this in the future!

This article has been written by the owner of Coretex – Zubair Asghar. The views expressed in the article are those of the writer and do not necessarily reflect the views of PAK MMA Team. Anyone interested in writing articles for PAK MMA can send their article at info@pak-mma.com