I was skeptical at first but soon after the belt ceremony and first fight I was convinced it would be an awesome day.

Now Vehshi Championship league did their event a little differently than most MMA events as they had arm wrestling along with their MMA matches, i.e. one MMA fight and then an arm wrestling match. This is because they were holding two tournaments for two belts in the same event, which was pretty exciting even if the pace was broken mainly because of the interesting rules for the MMA tournament. Now this was a three match tournament, meaning a quarter final, semi final then the final and the exciting bit was this that for each match there would be different rules. The quarter finals would have just grappling, the semis would have “Pankrase style” rules (grappling with low kicks and palm strikes, dubbed the Vehshi rules with the final having MMA rules.

The first fight was dubbed the Synergy showcase as two fighters from Synergy MMA were against each other and these two fighters were Sarim Rahim and Ahmed Qasmi.  The fight was a very good display of grappling with both fighters attacking and there were moments where it seemed like the fight would end but didn’t. Due to the competitiveness it went the distance and Ahmed Qasmi was declared winner on points and advanced to the Vehshi rules match. 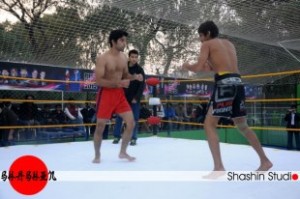 This was followed by an arm wrestling match and then  Uloomi Karim, an experienced fighter from Team Fight Fortress Islamabad faced Sheryar Qureshi, who also has a fair experience. Sheryar outweighed Uloomi by quite a bit but this didn’t deter him at all. He pushed the pace and finished with an arm bar. 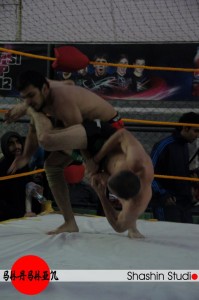 After another arm wrestling match followed by Haroon from Victory Dojo fighting Salman from Ghufran dojo. Haroon has a background in karate, just like Salman but also judo, he has also previously fought in PFC giving him MMA experience, however no strikes were allowed in this match. Salman seemed to be out classed but powered through some take down attempts by Haroon. Twice during the struggle to gain dominant position, the fighters almost fell out of the ring and near the end of the round Haroon pulled a guillotine choke to secure the win.

The next fight didn’t take place as Zulkarnain’s opponent didn’t show up and he progressed in the tournament by default, so this meant the semi finals would directly take place.

These would be under the Vehshi rules, i.e. palm strikes and low kicks along with grappling, and the first of these two was Haroon vs Uloomi. Both fighters were adept at striking but it was a matter of who could adapt quicker to using palm strikes instead of punches, and this proved to be Uloomi Karim. He attacked using palm strikes with deadly accuracy, especially if Haroon tried to clinch up but even then Haroon managed to fight back and get his strikes in. Eventually the fight went to the ground, with Uloomi landing palm strikes from the top and getting another armbar win. 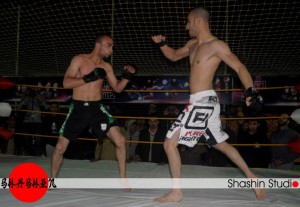 The next Veshi rules match was Ahmed Qasmi and Zulkernain. This was a pretty close match but it didn’t have the same pace to it as the previous one, mainly because it stayed in the grappling zone.  During a scuffle for improved position, during the final minutes of the round Ahmed Qasmi got caught in a guillotine and tapped, making the final Uloomi Karim from Fight Fortress vs Zulkernain from Victory Dojo.

This match was full MMA rules and the air was electric. The round started explosively with Uloomi taking the offensive, landing leg kicks and moving well. Zulkernain countered with his own low kicks but this not stop Uloomi from doing some damage and taking the fight to the ground. Once on the ground, Uloomi quickly gained dominance then started landing a barrage of strikes resulting in a very “controversial” TKO. This is because Zulkernain’s corner disagreed with the stoppage saying “He didn’t tap”. This was mainly because they didn’t completely understand the rule regarding a referee stoppage but the argument raged on. Ultimately they agreed to respect the referee’s call but still called it unfair, saying it was a quick stoppage but most people present there believed in it was a safe call as Zulkernain was not trying to improve position or defend intelligently. However, this fact didn’t affect Zulkernain’s corner and as soon as Uloomi Karim was given the belt, talks of a rematch this February had started.