The last week of December was an awesome week for Pakistani MMA. There was not one but two MMA events, but for now I will cover the first one that took place on the 22nd at National Grammar School, Lahore i.e. Pak Fight Club 3: The Contenders.

Over the last two years Pak Fight Club(PFC) has proven itself as a top MMA promotion with its exciting fights, incredible atmosphere and ofcourse the beloved “Paktagon” itself. To those who don’t know, the Contenders event is a trial or precursor to becoming a fighter for the professional PFC events.

The fighters started arriving 5:30 PM along with spectators, first in ones and twos but then before I knew it, the venue got crowded and soon it was time to start. The first fight was between Awais Shah of Synergy MMA Lahore and Muhammadullah Zazai from K-1 Kickboxing gym, Peshawar. Awais Shah is a fairly experienced fighter having around 3-4 MMA matches and Zazai was making his MMA debut. However knowing Zazai’s impressive background in kickboxing, most of the crowd was counting on him to win this easily. The start of the fight seemed to support that too with Zazai exploding with a barrage of combinations, battering Awais early on, but he seemed to be hanging in there and managed to clinch. Soon the fight was brought to the ground and Zazai surprised everyone by getting Awais in an arm bar, which he barely escaped. Second round however was totally different with Awais making an amazing come back, getting in mount and dominating Zazai with ground and pound resulting in a TKO. 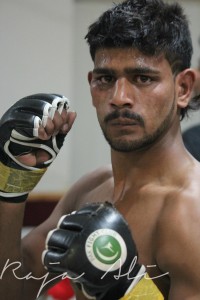 The next fight soon went underway between Ahmed Abbas of Synergy MMA and Ahmed Mujtaba of Team Fight Fortress Islamabad. Mujtaba pressed the pace on this one and the fight quickly ended on floor. At one point Ahmed Abbas almost got Mujtaba’s back but soon Ahmed Mujtaba started striking after getting mount, resulting in a TKO.

After that came Sarim Rahim of Synergy MMA vs Ali Haider Lodhi from Team Fight Fortress. Knowing both the fighters, it seemed to me like a very exciting match up, Sarim had good striking and jiujitsu while Ali has solid wrestling making this an interesting clash of styles. It was a very competitive match, with constant exchanges of combinations and Sarim almost getting a first round submission win. The rest of the rounds went the same way with, with both fighters pushing the action constantly, however it went the distance and resulted in a draw. 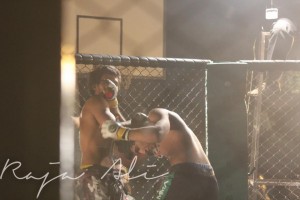 The following fight was Ahmed Qasmi of Synergy MMA vs Asghar Ali Changezi from Team Fight Fortress. This was also an exciting fight with lots of action both standing up and on the ground. Ahmed Qasmi struggled to get mount and carried out ground and pound to win via TKO.
After that came Ali Wahid from Synergy vs Usman Mirza from Team Fight Fortress Islamabad. Usman pushed the pace from the start of the fight, landing solid strikes and eventually taking the fight to the ground where he landed some heavy shots to Ali Wahid, however Ali managed to hang in there and eventually improve position near the end of the round. Second round was the same with Usman landing hard strikes standing up and then clinching and kneeing Ali in the body for the TKO win early on. 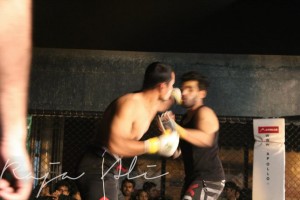 After that the hard hitting Idrees Zazai from Synergy MMA fought Harris Farooq from Anwar Karate Academy, Taxila. The round started with Idrees landing heavy hits from the start then taking it to the ground. Harris Farooq attempted a submission from the guard but was slammed and then Idrees started to connect with his hands. After some hard ground and pound Harris Farooq tapped out to strikes,giving Idrees the win.

The event’s last fight was between Muhammad ur Rehman from Shapes MMA Lahore vs Zubair Asghar from Synergy MMA. This started at a fast pace with both fighters swinging for the fences, however they both started showing signs of fatigue by the end of the round after battering each other with their best shots. The second round was mostly in the clinch or ground, with Zubair gaining dominant position and getting some punches to Muhammad while on the ground. The fight ended early in the third round with an accidently kick to the groin by Zubair resulting in Muhammad ur Rehman being unable to continue, causing a no contest.

Everyone seemed to have enjoyed the fights and Sheikh Sultan Shahid, CEO of VCL was present to promote another exciting day of fights three days after PFC, on the 25th billed as Vehshi Championship League: December to Remember!!