This Article has been written by Shahid aka Bobby D from the Hip Hop Community of Pakistan. He tells MMA journey of his student Nayl.

Not so long ago, Nayl walked into Cortex 3 sports venue, where fights took place at Club Synergy on April 4th of this year. We had a nice large crowd of visitors, way before even the event started. As I looked to the corner, I saw a young teen experiencing excitement of the event while sitting balled up on the matt. I could see that he wanted to be on the top of MMA community but was waiting for an opportunity. So I went over to this teen. He has already watched me move over towards him and was giving me a glare like he had seen me before. This spoilt my chance to sneak attack on him. I offered him to fight and move forward to test if he flinches which he did. I did not like that because as per my assumption this kid was a fighter, how could I be wrong?

I sat down to have a chat with him. It was then I came to know that it was his first experience in the world of MMA. I welcomed him and offered him a quick training session. He took the offer without any hesitation as if this was all he wanted along. I taught him some basic techniques of boxing, stretching and kicks. I told him the importance of pivot, and some basic rules like to keep your hands up and elbows tucked. We also did the ring practice which is something I teach as a coach for the Introductory classes here at Club Synergy. Moving forward I taught him a simple conditioning exercise and a grappling escape technique.

After the training session we waited for the event to proceed. A tv channel cameraman interviewed me and Nayl was pretty amazed and pleased to see that after giving the interview to news man and I sat back down with him to continue our conversation. 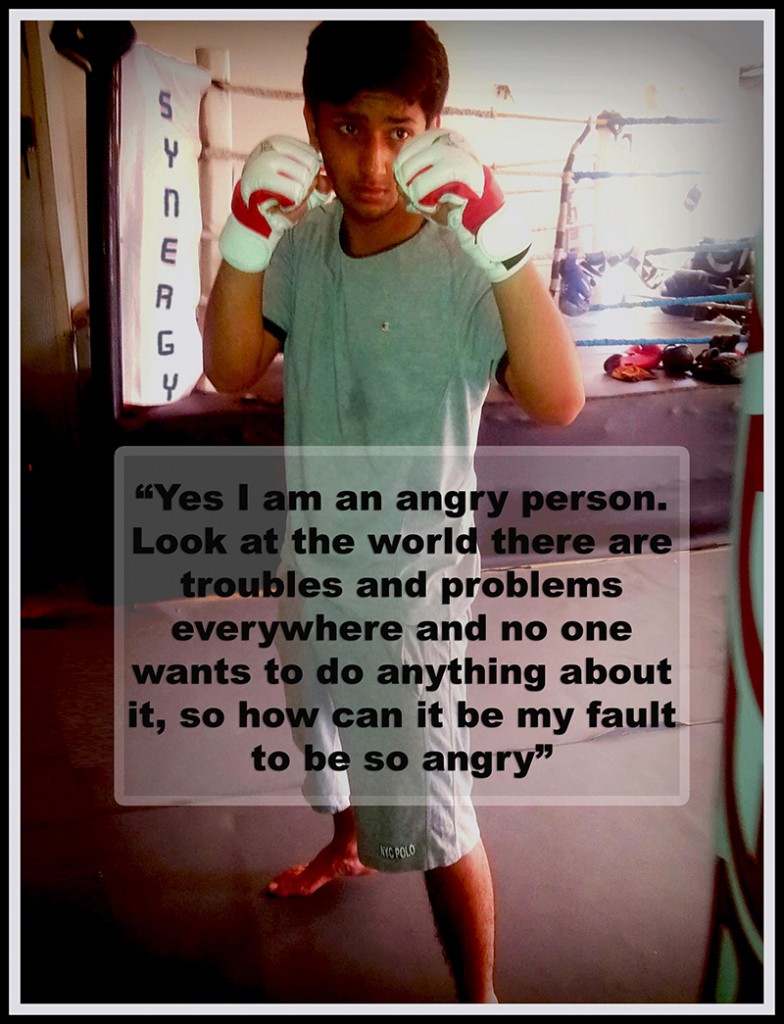 He wanted to have all the confidence, strength and skills like other MMA boys. Getting to know Nayl, I felt he is the next legend in Pakistani fighters or atleast will become a major player in MMA sport. This made me offer him another free training session the next day to which he showed up early. Soon Nayl obtained his MMA kit which included mouth piece, hand wraps and gloves and he formally joined the training in the following weekend. I trained Nayl in all the basic techniques of MMA which would help him to survive even the most intense weekly sessions with the much experienced MMA guys.

During the time I was coaching this youth, I learned Nayl always felt he had anger management problem due to which he and his parents both faced a lot of problems. Such as in school he always used to fight on small things like even if someone looks at him strangely, he would react in such a way that you would know for sure that he does not like it. All those fights and confrontations made Nayl to be on bad books of the teachers and the school staff which further led him to the way of destruction. Ultimately his reputation earned him the title of “Angry man who hits others”. Now I tell you about the journey of Nayl to MMA.

“Yes I am an angry person. Look at the world there are troubles and problems everywhere and no one wants to do anything about it, so how can it be my fault to be so angry” Nayl used to thought. With passage of time things got much more notorious and Nayl felt there was no solution to his problems. Each and every confrontation led him to fights and more problems for his family further causing more confusion and embarrassment for him.

Nayl used to feel he has lost control of himself and something was wrong with him for being stronger yet aggressive than the others. He started hearing the words repeatedly “kids like him are the problem of society”. One day Nayl had an argument with a girl in his school which led to a serious confrontation. That day he hated himself the most and realized he had to do something serious about his anger management problems.

To find solution to his problems Nayl did what most of the youth does these days; he searched the internet. Through internet searched Nayl found out that doing workouts can help a person to control his/her anger.

“I was quite fat and being heavy was one my most frustrating problems. I started with jogging then I did jumping, crunches, pushups and gradually did more complicated exercises but I felt I remained weak in some areas such as flexibility. As I started to get bored from doing workouts at home, I started to join gym one after another. But I soon got back to home workout as all the gyms had the same kind of coaches who were concerned just with the money rather than working on my weak areas” says Nayl.

It occurred to Nayl that he has been long involved in many fights and drama so why not do it in a fun way by becoming a fighter. His next quest was to find a place to learn fighting. He came to know of a Shotokan gym near his home where he trained in Karate for few months. Soon he was put against a yellow belt guy for a fight when he mentioned his fighting desire to his karate instructor. Nayl won that fight. He then continued his training and was put up for another fight with a senior who had bullied Nayl before. They had a three round fight and Nayl won it again. Nayl started to feel the place was pretty outdated and hasn’t anything more to offer. So his quest to find a training place continued.

“I wanted to have a good training no matter what I had to do. With the help of my friends I came to know that I had an MMA gym nearby. I got more interested as I learned about the organization PAK MMA, Bashir Ahmad and Synergy. One day I was sitting in a barber’s shop and having a conversation with the barber who had trained in Shotokan a long while ago. We were talking about karate and fighting stuff when an interesting guy walked into the shop for a haircut. He excused us in a polite and decent manner as he had overheard us. He introduced himself as Ahmed Qasmi and asked if I knew Bashir Ahmad to which I exclaimed “hell yeah”. Then he told me that he trains at his gym and he had fought national championships. For half an hour we had a chat and he told me pay a visit to Synergy atleast once.

Through internet search, I came to know a smoker event Coretex 3 is going to take place in Synergy where there will be many fights. I went to that event and as soon as I stepped in Synergy, I heard the words in my mind “Nayl this is exactly the place where you want to train and become a fighter.”

I came early to the Coretex event and luckily met the amazing guy who came there with a kid and they both did some amazing gym exercises. The guy was Bobby D who was soon to become my manager, coach, counselor and friend. Bobby offered me to fight and first time in my life I refused to fight and told him I am just there to watch the fights in the event. Still he was kind enough to offer me a free training session next day. Since I was not able to come for training everyday, Bobby managed to sort a training schedule for me to train on weekends only.

I wish there were more adults like Bobby who are playful and fun and also very serious at the same time when it comes to work and training. Bobby loves MMA and Hip Hop and holds introductory classes for kids, men and women. He has also practiced Jiu jitsu, Kungu Fu and Karate in Philadelphia and is friends with Bashir whom I hope to meet very soon.

Now nothing will stop me from training harder!”

The views expressed in the article are those of the writer and do not necessarily reflect the views of PAK MMA Team. Anyone interested in writing articles for PAK MMA can send their article at info@pak-mma.com However PAK MMA will hold the full rights of editing the article to meet it’s standards.