Ahmad Amin Bodla is a young double black belt holder of Taekwondo (2nd dan) and Karate (1st dan) who has set almost 31 world records held by various organizations and has been the youngest martial artist to score Guinness World Records. Moreover, he has been inducted in US Martial Arts Hall of Fame. Currently he is Coach in his own Academy Bodla Martial Arts & Self Defence Training Academy. PAK MMA had the honors to take interview from Mr. Bodla.

Can you give us a personal background of yourself ?

I was born in Sahiwal on 9th November 1993. I have been living in different cities of Pakistan throughout my childhood as my father was in the army, so we had to move to a location almost every year. I went to different schools of different cities. Presently, I am studying Computer Science at the University of Lahore.

How you got interested in martial arts and why you started it?

When my father was a brigade commander in Kharian in 2008, one of his guards was a Taekwondo black belt. I learnt basic Taekwondo from him for a few weeks. The next 8-9 months I trained at home. In the summer of 2009, I joined the national Taekwondo team and got my black belt from them after 3 months of hard training. It was a childhood ambition to become a black belt, so I made full use of the opportunity to learn Taekwondo.

In which arts have you trained?

What motivated you to make so many world records?

I have struggled with asthma since childhood. When I started martial arts, my endurance level was very low. I could not kick more than two times before going breathless. So I accepted it as a challenge to develop sheer endurance, that is what lead me to world record attempts.

Who is your biggest inspiration in martial arts?

I am inspired by many athletes. Actually anyone who has worked hard to make it to world level gives me motivation and inspiration. I am inspired by martial artists like Robert Ardito(Aus), John Ozuna(USA) and Raul Meza(USA). I am also inspired by ultra-endurance athletes like Pady Douyle(UK) and George Hood(USA).

Which is your favorite martial art move and why?

The Side kick and the Split kick are my favorite moves because you can judge the proficiency of a kicker by simply observing these two moves.

Tell us something about your training. What is your daily training plan and what extra training you do before attempting to set a record?

Well to be honest, I don’t find proper time to train because of the tough university routine. I just do regular conditioning exercises and on the day of attempt, I rely on my mental endurance to break a world record.

As a martial artist, what challenges do you face in Pakistan?

Pakistani people do not understand the importance of martial arts and physical fitness. Cricket means everything to our nation. The lack of support from the Government makes things even worse. Many talented martial artists are forced to quit because of the financial pressures. Whenever I attempt any world record, I do it with my own expenditures. I break world records as a passion, not as a profession. I am studying computer science because I have to work as an IT expert. I can’t afford to adopt martial arts as a full time profession in Pakistan because there is no financial benefit in doing so. 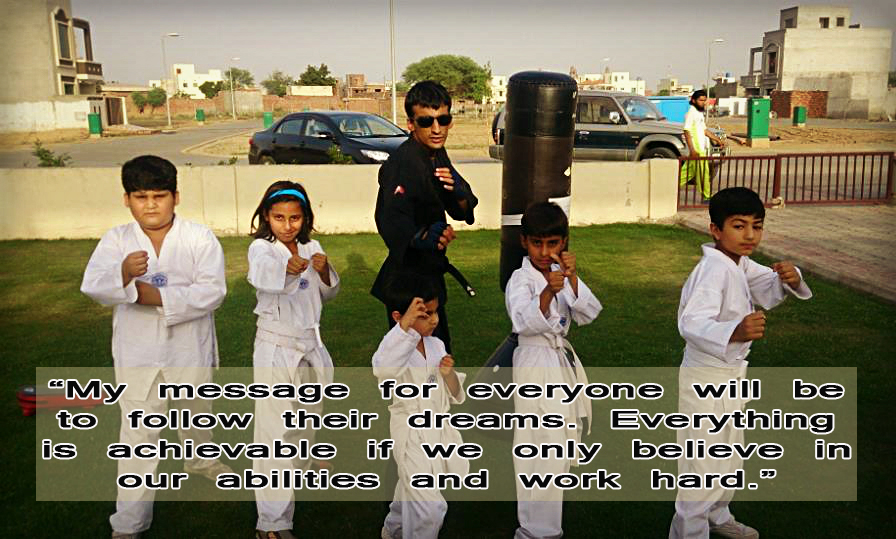 Tell us about your Bodla Martial Arts Academy

I teach taekwondo, karate and special self-defense moves at my academy. The academy is located in Bahria town, Lahore.

Where do you see yourself after 10 years?

I have no idea. ALLAH knows whatever I am destined for. Personally, I plan to go abroad after completion of my degree.

What is your opinion about MMA?

It’s a sport that tests you both mentally and physically. I like it but I do not plan to become an MMA fighter.

What suggestions would like to give to PAK MMA?

I think they are doing a great job in the promotion of martial arts in the country. My advice will be to keep it up! I admire their efforts.

What message do you want to give to PAKMMA Lovers?

My message for everyone will be to follow their dreams. Everything is achievable if we only believe in our abilities and work hard.