Talking about Pakistan versus India, the first question is how different the scene of MMA is in both the countries. MMA can be still considered a developing sport in India but when compared to us they are still almost 10 years ahead of us. In 1993, Indian martial artist Solomon Issac got an invitation to send one of their fighters to UFC-1 which never happened because of the visa problem. The sport was mainly brought in India with the introduction of Tiger Gym in 2000. India has quite MMA promotions some of which were even working before SFL. Notable amongst those promotions are Full Contact Championship (FCC), Body Force MMA and Yoddha Fighting Championship. Moreover there is a Government Registered board of control Indian MMA called All India Mixed Martial Arts Association (AIMMAA). Please watch the below documentary if you want to know more regarding the history of MMA in India.

As Bashir Ahmed is considered pioneer of PAK MMA, Daniel Issac – son of Solomon Issac and owner of Tiger Gym is considered pioneer of MMA in India. Bashir Ahmed has always been good friends with Dan and he has even trained in Tiger Gym which is owned by Daniel Issac back in 2009 (Read about Bashir’s training in Tiger Gym) After Bashir Ahmed got signed by ONE FC, talks started to place Bashir Ahmed against any Indian MMA fighter in ONE FC after his first fight with Shanon Wiratchai. Daniel Isaac formally announced the beginning of the Pakistan vs India rivalry soon before the Shannon fight, bringing to the public long awaited discussions and hopes for a rivalry that would eclipse cricket.

Around this same time Super Fight League was founded by Raj Kundra (Husband of Shilpa Shetty-Bollywood SuperStar and Owner of Rajasthan Royals) and Sanjay Dutt. SFL was a huge milestone Indian MMA as it bought big investment and huge media coverage. Dan joined SFL and took with him many Indian fighters from ONE FC leading to a big rivalry between the two promotions.

Many immediately wondered when Pakistan vs India fights would happen. This possibility emerged at SFL 2 when two of the Pakistani fighters Waqar Umar and Uloomi Karim were signed for SFL 2 which was to be held on April 2012 in India (Check the old news about SFL 2) but due to visa restrictions, both fights couldn’t took place. On SFL website, you can still found the details of Waqar, Uloomi and some other Pakistani fighters who were considered for fighting in SFL.

On April 2012, Organizers of PFC were successful in arranging first MMA event between Pakistan and India at PFC 4. Indian Udit Thakkur made his Professional MMA debut and fought with the PAKIDO Ahmed Ali in PFC 4. Udit won that fight through unanimous decision.

That milestone India vs Pakistan event at PFC 4 very possibly led to SFL’s decision to make greater efforts in making the Pakistan vs India fights a reality. That reality came when MMA promoter Sheikh Sultan Shahid – founder of VCL came up with the news that indeed a Pakistan vs India event would be happening in Dubai and with Bashir being a part of ONEFC he was now the SFL representative for Pakistan, the cream of PAK MMA fighters were selected for the event.

SFL conducted a Press Conference on January 28, 2015 regarding the news of SFL 38: India vs Pakistan. The main people who presided the Press Conference were Raj Kundra-SFL Chairman and CEO, Haroon Khan-Professional boxer and brother to Amir Khan and Bill Dosange-Co-owner of SFL. Ali Abbas attended the Press Conference on behalf of PAK MMA. He provided us with the report that the press conference started with introduction of MMA and history of SFL followed by a video promo of the event. Instead of mentioning the name of fighters, Raj Kundra mainly tackled with the topic of Pakistan vs India and provided with the background of MMA in India. Haroon Khan talked about his experience as a professional fighter coming out of a country like Pakistan and rightly said that there is endless supply of talent in both the countries.

To get more insight on the upcoming event, we had contacted Usman Habib – founder of Team Storm. A Certified Chartered Accountant by profession in Lahore, Usman Habib is the first person who dared to start independent team to support and sponsor fighters due to his interest in combat sports. About asking why he started Team Storm he replied “At the first MMA event I attended, Pak Fight Club 3, I was impressed to see the quality of the event and the maturity of the fighting techniques showed by the fighters. When I was coming to the event I thought it would be chaotic fighting between untrained hooligans, but my stereotype was broken when I witnessed some of the fights. There I also noticed that some of the fighters were from extremely humble backgrounds, so I was even more impressed that how did these guys become so good in such a demanding sport. At that point I felt obligated to do something for such fighters who were risking so much in the cage but were getting next to nothing for it. So when I met Bashir I asked him to refer me such fighters who were talented and hardworking and also deserving, to whom I could provide financial and managerial assistance. I was able to get those fighters sponsored from my then Employer Ravi Motorcycles, who assisted them financially, taking care of their training, equipment and fight expenses. Storm was one of the motorcycles made by Ravi so we named the Team ‘Team Storm’”. Currently Team Storm consists of 4 fighters from across Pakistan (3 from Lahore including well known Waqar Umar and Ovais Shah from Karachi) and 1 honorary member from Cambodia. 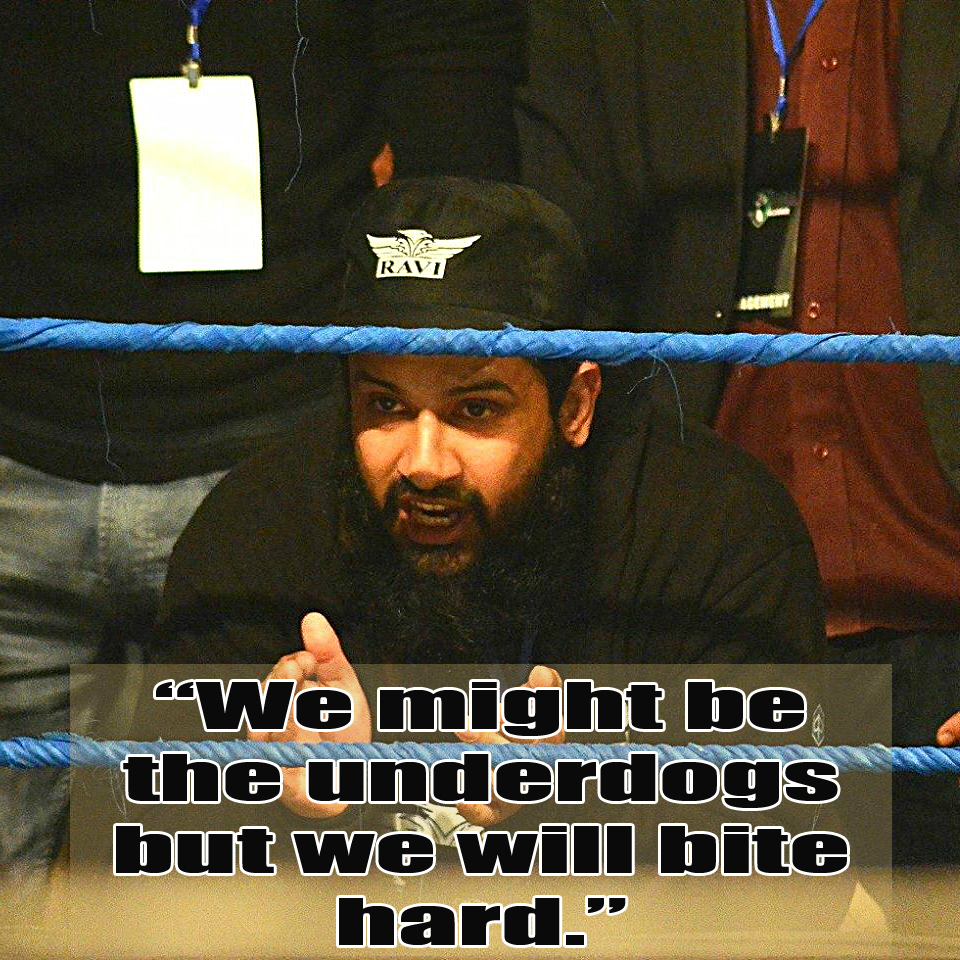 For the upcoming event again, Mr. Usman once again build a “Team Pakistan” with Sheikh Sultan Shahid. “Unlike usual MMA events where Individual fighters compete, the upcoming event of SFL is based on a Team concept. Thus it is going to be ‘TEAM INDIA vs TEAM PAKISTAN’. So Sheikh Sultan Shahid and I are collaborating in terms of providing the best coaches, facilities, nutrition and training that we can manage within our limited resources to the members of TEAM PAKISTAN. And as an ongoing service to the Pakistani MMA community we shall endeavor to provide the maximum financial and managerial support to emerging talent of Pakistan in MMA either through our own means or via engaging other supporters”, Mr. Usman told us. “We are trying our best to provide ‘The’ best training camp that is possible in Pakistan to TEAM PAKISTAN. For this purpose TEAM PAKISTAN shall be training at VCL FIGHT FOR FITNESS the premier MMA training facility in Pakistan, under the best Coaches in their respective disciples from across Pakistan such as Mr. Malik Iftikhar sb, Mr. Bashir Ahmed, Mr. Amir Mukhtar, and Mr. Arshad Jan sb – Each a legend in his own discipline. We are looking to combine their expertise and put forward the TEAM that will have no weak areas.”

“The Big One is upon us. Pakistan vs India is always big…even if it is in checkers 🙂 . So this is a golden opportunity for MMA to become part of the mainstream sports in Pakistan. If we are able to perform well in this event, it will open doors for so many aspirant and talented youth from across various disciplines of martial arts to transition to MMA” Mr. Usman said while talking about the opportunities this SFL event is going to provide.

“The future of MMA in Pakistan is bright….we love to fight 🙂 ………We just need to bring it in the cage 🙂 . And events like the upcoming SFL shall only Turbo Charge the evolution process. I believe in TEAM PAKISTAN……we might be the underdogs but we will bite hard 🙂 ”, he added.

Players of Team Pakistan have kept changing since its inception. Final fight card of SFL 38 is still yet to come but it Is confirmed that there are going to be 7 bouts with the main event of Light Heavy Weights Sameer Khan vs Amit Thappa. Other expected fighters are Alamgeer Prince Khan in Welterweight, Abdullah Haiderzai in Bantamweight, Ahmed Ali in Featherweight, Usman Butt in Welterweight, Jerry James in Light Heavyweight and Shams Rehman in Flyweight. Jalil Ahmed will be the manager of Ahmed Ali and Usman Butt whereas Sheikh Sultan will be the manager of rest of the players. Bashir Ahmad and Afnan Iftikhar will also be representing Team Pakistan.

Closing this article with the message of Mr. Usman Habib to the PAK MMA Lovers “Believe 🙂 ”